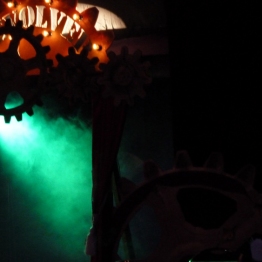 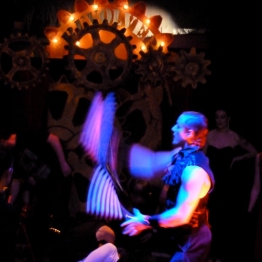 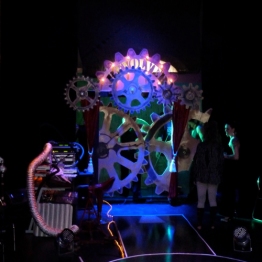 IN A STEAM PUNK SCI-FI WORLD, REVOLVER CAPTURES THE ROMANTICISM OF THE TRAVELLING CIRCUS & COMBINES IT WITH THE RAW CONTEMPORARY BLOOD-LUST OF THE STREETWISE MODERN WORLD.

With the audience all around the stage, the boundary between art & life dissolves & the audience becomes immersed in the imaginations of the artists where anything can & does happen!

Shiloh Dobie painted the animated cog Set, through which the performers enter the stage (depicted).

All in all, Revolver is a remarkable, raunchy and risibly rude night at the cabaret circus.